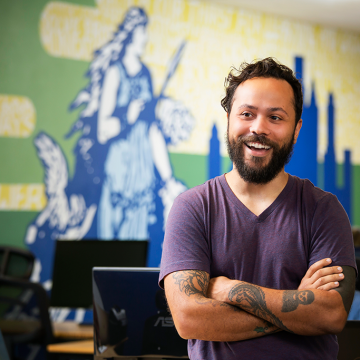 It has always been my intention to have a career that was enjoyable and fulfilling. It took me many years to figure out what that meant to me.  I believe that Freya embodies every aspect of the career that is not only enjoyable but fulfilling.

I spent five years working in the oil and chemical industry doing mechanical integrity inspections using non destructive methods. The work was fulfilling in the sense that I was doing something different nearly every day, but also did something that required me using my brain. It was physically draining and often left me too exhausted to enjoy anything outside of work. It also required me to work very long hours, sometimes twelve hours a day, seven days a week, for months at a time.

I decided it would be best for me to further my education in order to have a career that was not only rewarding, but also allowed me to have enough energy to do things outside of work for personal enjoyment. In order to do that, I joined the army and served for five years.

While in the Army I learned many valuable skills. Most of these skills were regarding leadership. I learned how to listen to my co workers and to provide a comfortable space for them to grow and be more proficient. I realized while serving that I enjoyed being a team leader and it was something I wanted to incorporate into my career.

After the military, I decided that the tech industry was a perfect way to explore leadership, technical skills, and a way to move forward and do something that will constantly be needed in the future. By learning how to be a software developer, I could work for nearly any industry and provide a service that would be long lasting and rewarding.

I found a three-month immersive code bootcamp called Zip Code Wilmington that sounded perfect for what I was looking for and for my style of learning. It turned out to be just that; a rigorous schedule that threw me into the ‘deep end’ of software development. This is where I was introduced to Freya Systems. I knew immediately that I would be a great fit for this company by the employer’s vision of their future and how it coincided with my own.

At Freya I have been able to apply everything that I’ve learned in my prior work experiences, as well as learn and develop new skills. After two years with Freya, I’ve been able to learn new technologies, work in development teams producing helpful software for military aircraft. I am currently a team leader and able to use the leadership skills I learned in the military as well as develop new leadership skills that directly apply to the tech industry. Freya’s culture nurtures individual as well as team development and provides a comfortable atmosphere in which to grow. I feel challenged, rewarded, pushed, and comfortable on a regular basis. That makes this the most fulfilling career and working environment that I could have asked for.