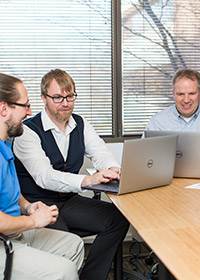 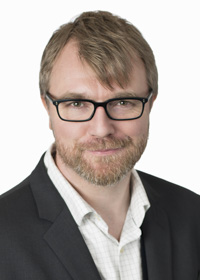 Ben is a leader, entrepreneur, engineer, introvert, designer, optimist and analyst to name but a few.  Fascinated by what makes things fly and soaring on his own piloting experience Ben studied and qualified in Aerospace Engineering with first class Honors from the University of Hertfordshire in Great Britain.  He has turned his hand to numerous roles throughout his career motivated by a desire to continually learn.  Founding Freya in 2009 and learning how to lead has created a deep passion for Ben and a driving force that helps him get out of bed each morning.  Ben’s role is to create an environment at Freya to help others learn, grow and enjoy their work.

Ben believes that if we live outside of our comfort zone, learn and grow together we can build a richer world for everyone as well as having more than a little fun on the way.  Ben is inspired and sometimes influenced by great thinkers such as Simon Sinek, Brene Brown, Edward Tuft, Mark Manson, Richard Branson, Neil Gaimen and Seth Gordin.  Ask Ben for a book recommendation and he’s bound to share two or three.

Outside of his role and time in Freya Ben loves to stay fit and active: trail running, cycling, hiking and salsa dancing.  Ben can occasionally get a tune from a guitar, always has a good book on hand and indulges in the odd video and board game.  Ben also volunteers to help those in need maintain their home and is always looking for other opportunities to donate a little of his time. 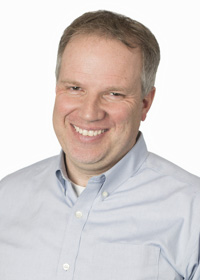 Paul Townend serves as Chief Operating Officer/Chief Technical Officer and Co-Owner of Freya Systems and oversees the organization’s ongoing operations and procedures. He provides leadership for the continued development of an innovative, robust, secure development environment and defines the technical vision of Freya. He enjoys the hands-on technical challenge of software development and learning new languages, which supports the company culture of continual learning. Paul is known for his ability to address a prospect’s needs in a language they can understand.

He loves long walks with his wife, daughters and their crazy dog. 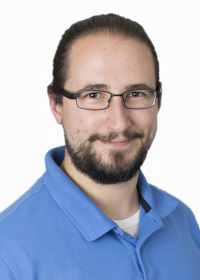 Chris MacNeel is the lead Data Scientist at Freya Systems. He loves working with all things data and has a knack for problem-solving. He has a Bachelor’s Degree in Physics from West Chester University and is currently working on a Graduate Certificate in Applied Statistics from Penn State University. When he’s not working he enjoys spending time with his family, cooking, and watching the Flyers and Eagles. 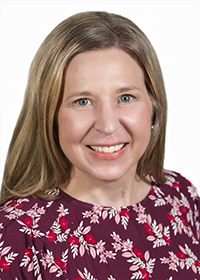 Terri is the Software Development Manager at Freya Systems.  Having held a variety of roles from software developer to manager, Terri is passionate about helping her teammates be successful in their endeavors.  After many years working for a large organization, she enjoys the open and collaborative culture that Freya provides.  Terri enjoys spending time with her husband and family, grabbing a walk whenever possible, yoga, cooking, gardening and hanging out with her dog and a good book. 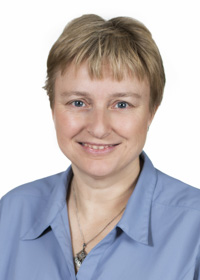 As Finance Manager, Vicki oversees all areas of finance and administration including: payroll, accounts payable and receivables, cash management, and banking and reconciliations. Vicki also provides strategic analyses for senior management to determine project and company profitability and ensures compliance with small business regulations, tax laws, insurance requirements, industry standards, etc. Vicki enjoys working at Freya as she enjoys problem-solving, providing timely and relevant analyses, and working as a team to grow the company culture and success.  Vicki spent 10 years working in the UK energy market before moving to the US.

Vicki is married to Paul Townend – they have two teenage daughters, a crazy dog, and a cuddly cat.  She loves the beach, waterfalls, and lighthouses. 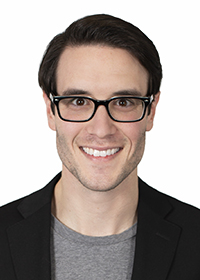 Michael O’Donnell loves to solve problems or come up with new, innovative solutions using technology.  As a full stack developer, he is exposed to all layers of an application allowing him to be more productive and creative for our end users.

Michael enjoys working at Freya and sees it as a natural incubator for learning due to its talented community of technologists, managers, and leaders.  He takes the perspective of coming to work each day with an understanding that he will learn something new and finds his work extremely exciting and rewarding.

Technology, even outside of work, is a major passion of Michael’s.  However, when he breaks away from the keyboard, he is often found on his bike, watching or playing sports, and always enjoying the company of his loving friends, family, and fiancé. 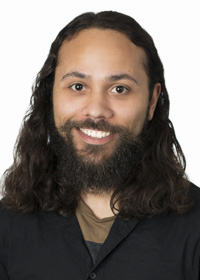 Albert Collazo is a software developer at Freya. He enjoys working in an open team environment and being involved in the tech industry. After attending an intensive three-month java, based coding camp, he jumped at the opportunity to work with the Freya team doing full stack development. While not in the office, he plays musical instruments in a band, spends time with his family and enjoys going out to see live music. 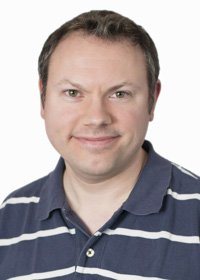 As a developer, Ben Wood specializes in application back-end functionality in Java. He has been fascinated with computers and programming since coding in COMAL at school or on his Commodore 64 at home (yes he is that old).  Ben enjoy the flexibility of working for a smaller company and the sense of togetherness and support fostered within the Freya Team. Ben has a cat who does not understand that all the socks and pens in his house do not belong to him. 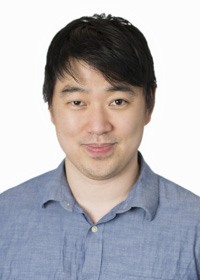 As a developer, Ethan Pidcock specializes in Javascript.  Ethan enjoys the flexibility of working for a smaller company and the sense of togetherness and support fostered within the Freya Team. In his free time Ethan likes to play Dota 2. 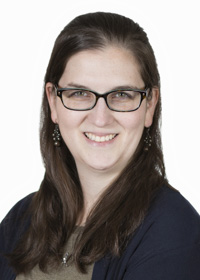 Katherine Anderson is a data scientist because she knows statistics better than most software developers and has better programming skills than most statisticians. She holds a B.S. in Mathematical Sciences and Materials Science Engineering from Carnegie Mellon University and an M.S. in Applied Mathematics from University of Southern California. She loves figuring out how to manipulate data in R and Python to help develop and represent mathematical algorithms. Freya Systems gives her the freedom to work in “puzzle-solving” mode and the guidance to contribute to overall business needs. As a graduate of the Zip Code Wilmington coding bootcamp, she also enjoys Freya’s similar approach to work in that we all take our work seriously while maintaining a fun work environment. Outside of work, Katherine sings in two a cappella groups, plays board games, competes in Quizzo nights in Media, and enjoys spending time with her husband and two cats. 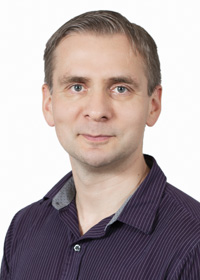 Vlad Belyanvskiy is a Full Stack Developer at Freya Systems. He enjoys problem-solving and learning something new every day. He prefers to use the latest technologies and coming up with creative solutions. Vlad loves the smaller company feel at Freya. Because it is smaller he gets to design, develop and test the projects himself. When he’s not working he enjoys spending time with his family, cooking, and watching the Flyers and Eagles.

Lauren Green is a Data Scientist at Freya Systems with a background as a math educator as well as a B.A. in Economics from Emory University. Lauren has always enjoyed using data to answer questions. After a three-month intensive Java boot camp, she is excited to combine her coding knowledge to analyze data using R and Python. Freya provided the perfect opportunity to continue learning while tackling challenging problems in a supportive and fun work environment.

Lauren is an avid puzzle-lover with a large Rubik’s cube collection. Additionally, she has done over twenty escape rooms with her husband, friends, and family loving the challenge and teamwork they provide.

Trying new things has always been one of Lauren’s passions including glass blowing classes, traveling to different parts of the world (45 countries and counting), cooking new cuisines, or renovating her 100-year-old South Philadelphia row home with her husband. 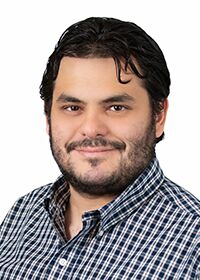 Stefano comes to Freya after several years in the transportation and logistics industry as a full stack developer.  His role is identical at Freya, where he works on a range of projects, mostly involving Java and SQL. He finds the smaller and more relaxed atmosphere of Freya to be refreshing after working for larger organizations, and enjoys the opportunities to learn new skills provided by the company’s culture. Stefano has a degree in Computer and Information Sciences from Temple University. In his spare time he enjoys gaming, working on pinball machines and hanging out with his lovable canine sidekick while eating ridiculous amounts of pizza. 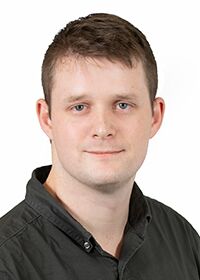 Will Redington is a Software Developer at Freya Systems.  He loves solving problems and learning new stuff.  He has a Bachelor’s Degree in Information Science from Penn State.  When he’s at work he enjoys consuming copious amounts of coffee and soda.  Away from work he enjoys spending time with the family and hiking. 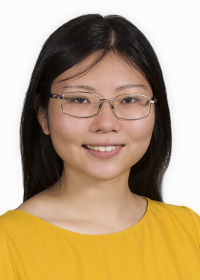 Christina Zhou is a data analyst providing support for reports, liaising with partners, and happiness for the team at large. Her background started with a couple of Java courses on the side in college at the University of Pennsylvania. Though she majored in Health & Societies with the thought of working as a non-profit coordinator, she found a great demand for her skills in Excel VBA and then in STATA and python. As someone who values efficiency and excellence, she recognized Freya immediately to be the right fit for the company’s emphasis on cutting edge technology and quality solutions. Furthermore, she realized Freya was also a place where she could feel happy and excited as there were more people like her, people who grew up with tech but whose identity continued to expand beyond that. Outside of work, she likes to practice positive psychology, read fantasy and sci-fi novels, play GameCube games, and draw with pastel and oils.

Send us a message to start the conversation.